English Residential to Stratford upon Avon 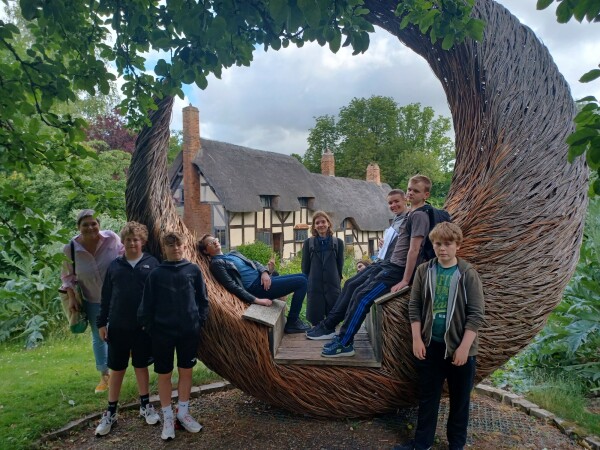 English Residential to Stratford upon Avon

In June and July the English department took students to Stratford upon Avon for a residential trip. Students from years 9, 10 and 11 attended a pre-performance lecture by Dr Darren Freebury-Jones at Hall’s Croft the adult home of Shakespeare’s daughter Susanna, and her husband, a prominent physician of the town. Dr Freebury-Jones (a lecturer in Shakespeare studies) offered illuminating insights into the historical context of the play Richard III as well as taking us through the historical performance history of the play and our students contributed to the talk with perceptive observations and insights. The highlight of the trip was watching actor Arthur Hughes playing the part of Richard III in the 1000 seat Royal Shakespeare Theatre. His was a historic performance; the first disabled actor to play a lead role for the RSC. Hughes said of playing the iconic king: "It’s no exaggeration to say that playing Richard at the RSC is a dream come true. Richard is the most murderous and charismatic character in Shakespeare's plays, and… he’s disabled. I’m thrilled not only to be playing this title role at the RSC, but also that a major production of this play is putting disability centre stage. It’s sadly rare in many plays to find a leading disabled character, and with this production I hope we prove that disabled talent deserves to be in the spotlight." The standing ovation at the end of the play was well deserved – his performance, and the performance of the entire company was electrifying; especially as our seats were almost within touching distance of the stage.

In addition to watching such a thrilling performance we also enjoyed a backstage tour; in June, having the opportunity to watch the actors in final rehearsals before that evening’s performance, and in July visiting the Costume Workshop – a building with resources at the cutting – edge (sorry, couldn’t resist the pun) of costume design and creation. We visited three museums: Anne Hathaway’s cottage and gardens (childhood home of Shakespeare’s wife), The Birthplace Museum where Shakespeare grew up, and New Place, the home he bought when he returned to Stratford from London having made his fortune acting in and writing plays.

Our students were delightful company and conducted themselves throughout with maturity and respect and we can’t wait to return in October for another residential, giving another group of students the opportunity to watch Richard III and see All’s Well that End’s Well; the final two plays to be directed by Greg Doran which completes the current decade long run-through of Shakespeare’s entire canon of plays and sees Doran step down as artistic director of the RSC. It should prove to be another memorable trip.

“ ”
I have been impressed with the communication from school and the speed at replying to queries.
Parent